We’re pushing deep through “Old Russia” in the Altai Mountains of southern Siberia – wolf and bear country! As fate would have it, a random stop in a small village saw us befriended by the resident school principal “Victor Petrovic” who convinced us to join him on an excursion into the mountains with his students. Within a few hours we were helping build a table and chairs that will complete part of an eco trail, for the purpose of educating a better life for the children and all who visit their historic village.

That night we were accommodated by Vladimir and his wife Tatiana. Vladimir is like the town handyman who can build and fix anything, but his forte is distilling the most hard-core alcohol we’ve ever experienced: Russian Whisky made from the sap of Russia’s national tree… it’s clear like Vodka, tastes like Frangelico and packs all the punch of Grappa. Happy to report no headache in the morning, just felt a little dumb and very happy.

We’re tracking further south east toward the border of Mongolia and the terrain is becoming more extreme and impassable. Roads have turned to donkey trails in knee deep mud and ruts.

Day 10 has been our biggest yet spending 12 hours on the bike and only covering 550kms – most of which is full-on enduro country. We’ve hit a lot of dead ends and treacherous river crossings, but have the luxury of back-tracking thanks to the fuel bladders we’re carrying.

Our KTM’s are getting it done without the fuss, but we’ve had to make a few minor repairs on the saddle systems – most of which was caused from crashing. We’ll be offline again for a while and hope to check in once we’ve crossed the Mongolian border. Later… 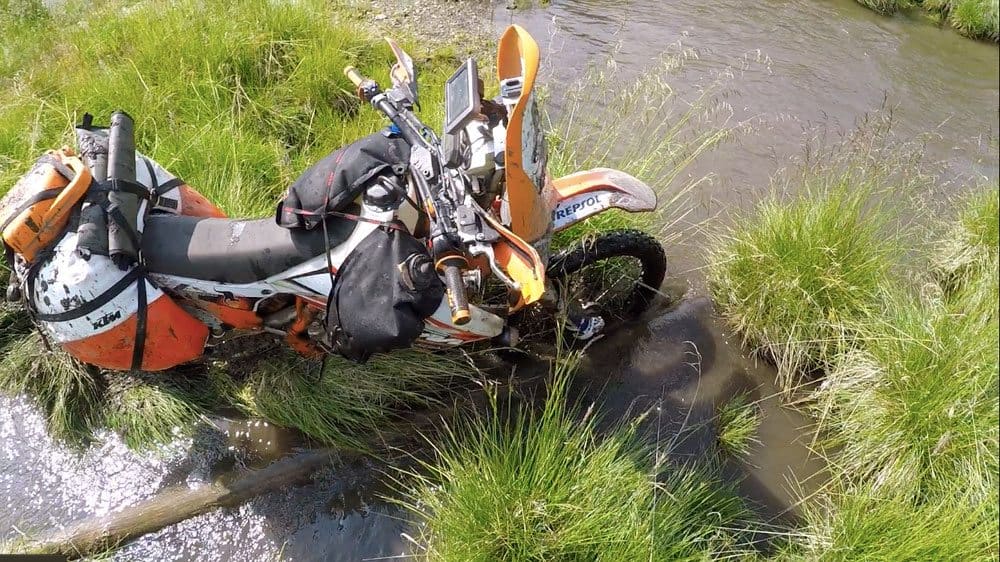 Motonomad II – Into the back gate of Mongolia
Scroll to top