I’m not into cars. Well, at least not to the point of having a favourite brand, model or type. No, cars have simply been a means to transport my dirt bike to races or riding areas, and I really only value them for how well they can do exactly that. And, more recently, the evolution of twin-cyclinder, long range Adventure bikes negates the need to own a ute or van because you can simply ride the bike into remote landscape … if that’s what you’re into.

What if I wanted to grab a mate and take our KTM 300EXC race bikes on a monumental outback adventure? I know it would totally suck spending that much time buzzing along a bitumen highway on our two-strokes, and they’d need so much extra fuel stowed on board that they’d handle like over-burdened donkeys anyway. So, it got me thinking – load the bikes onto a vehicle capable of carrying them into some remote, epic landscape. A place so far from our usual moto habitat, a place where two-stroke motorcycles simply do not go … The Kimberley Region! 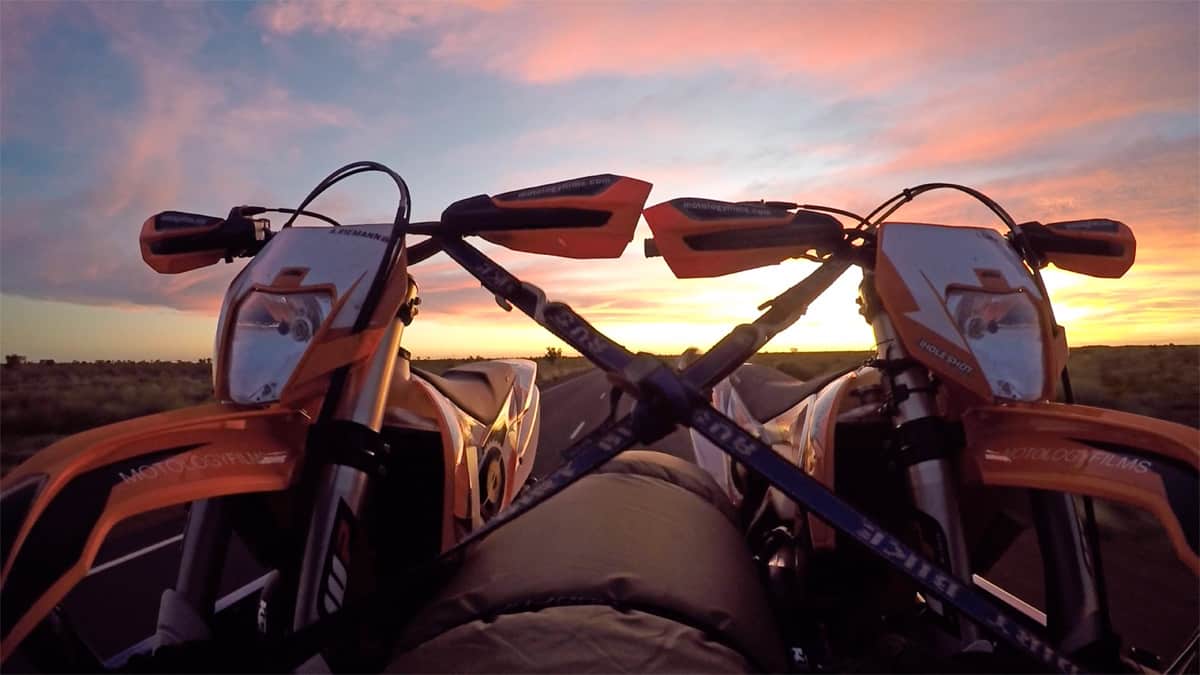 With that, Louis Calvin and myself plotted to hit far north Western Australia, we just needed a vehicle to take us there. With no contacts in the automotive industry, I took the long shot of requesting a vehicle via post on social media, in the hope of catching the attention of a worthy car manufacturer. It worked, and within three days I drove a current model dual cab Triton out of Southside Mitsubishi here in Perth.

For the hardened 4WD enthusiast, the notion of taking a brand-new  Triton – complete with Highway Tyres –  straight off the showroom floor and aiming for the Gibb River Road may seem foolishly unprepared, but it’s simply indicative of my knowledge of cars. It’s a 4-wheel drive right, what else do I need? 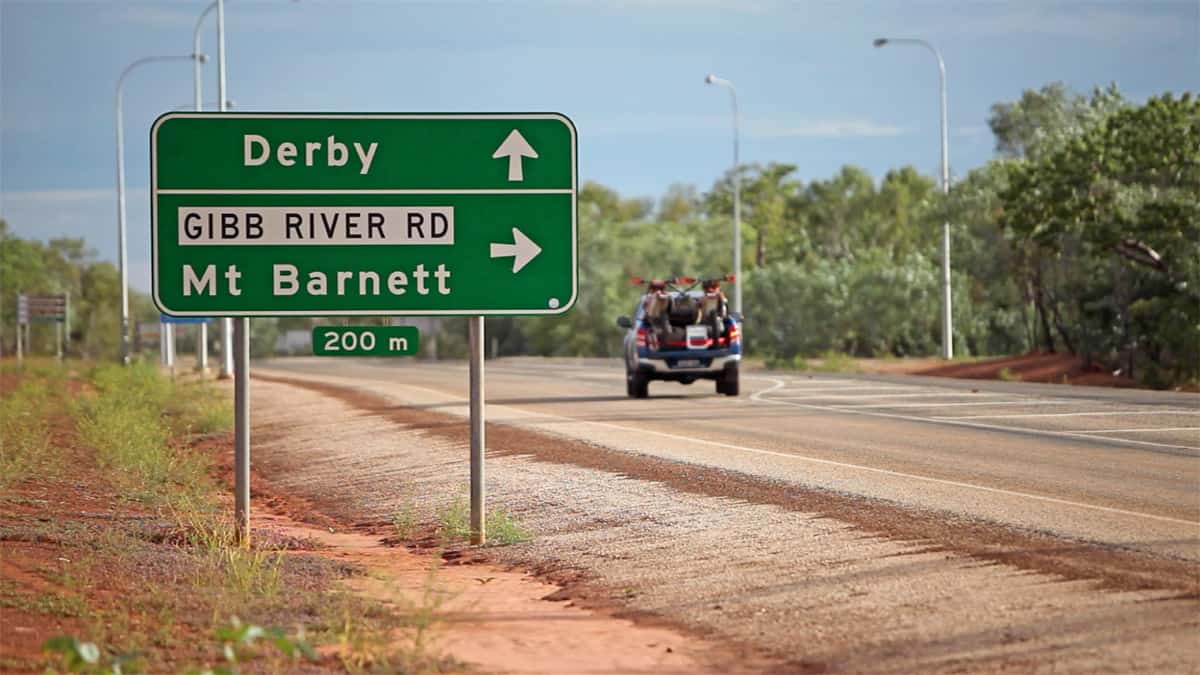 2500km later we hit the start of the Gibb River road and spent most of the highway trip googling all the pitfalls of entering this remote part of Australia. Window-deep river crossings, torrential rain stranding vehicles for days, rocks obliterating tyres, no phone service, limited fuel stations, and of course, crocodiles. With our one spare 4WD tyre, ice-packed eski, two swags and a bottle of two-stroke oil, we steered into the iconic Gibb River Road. 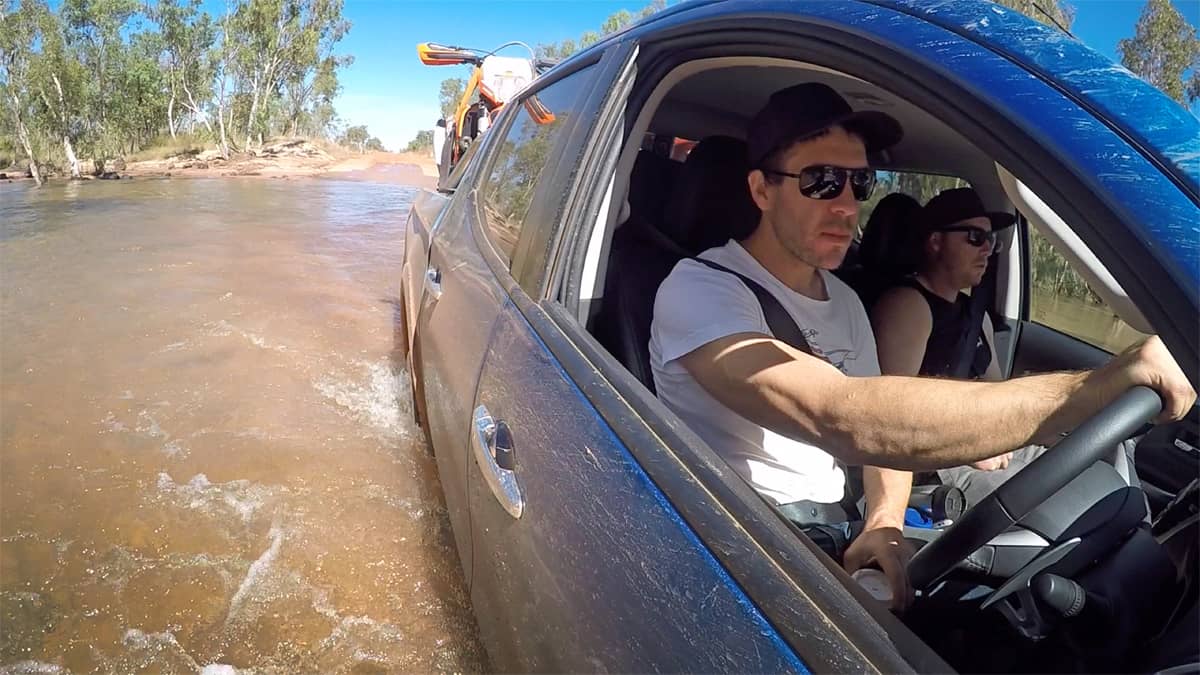 Riemann nursing a coffee between his legs as the Triton carries the whole show across another river on the Gibb. 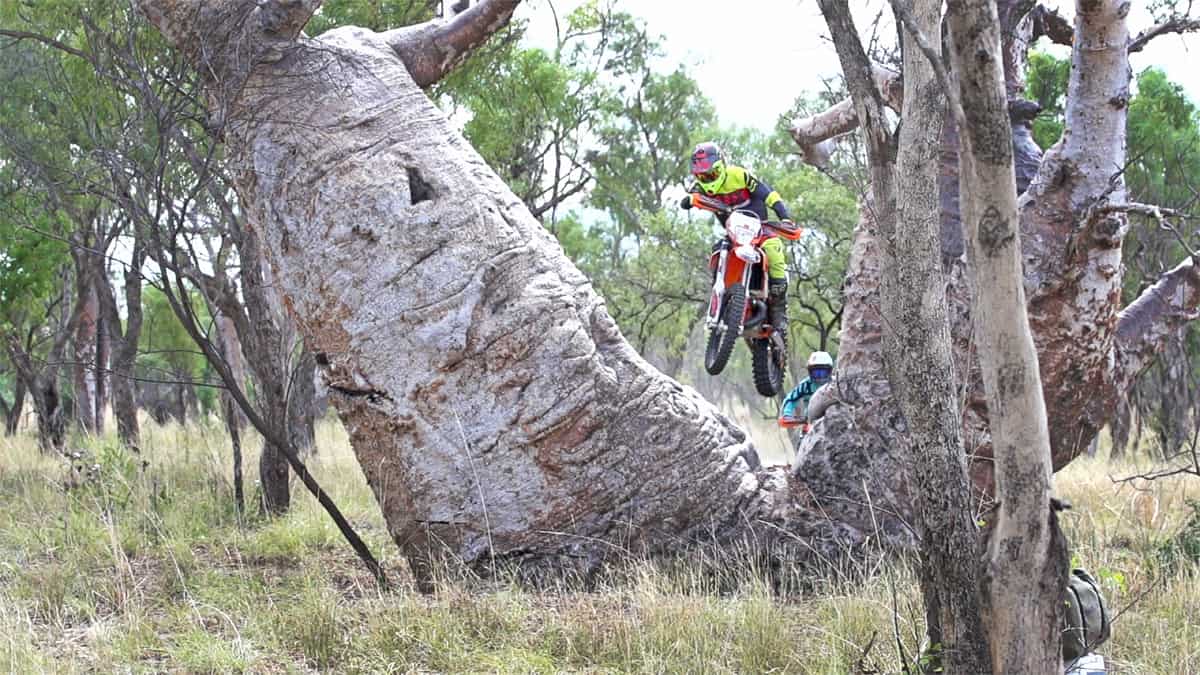 A quick lunch stop then Boab boost. And yes, this old tree was one of the rare dead ones among the 26-million other Boabs along the Gibb River Road. 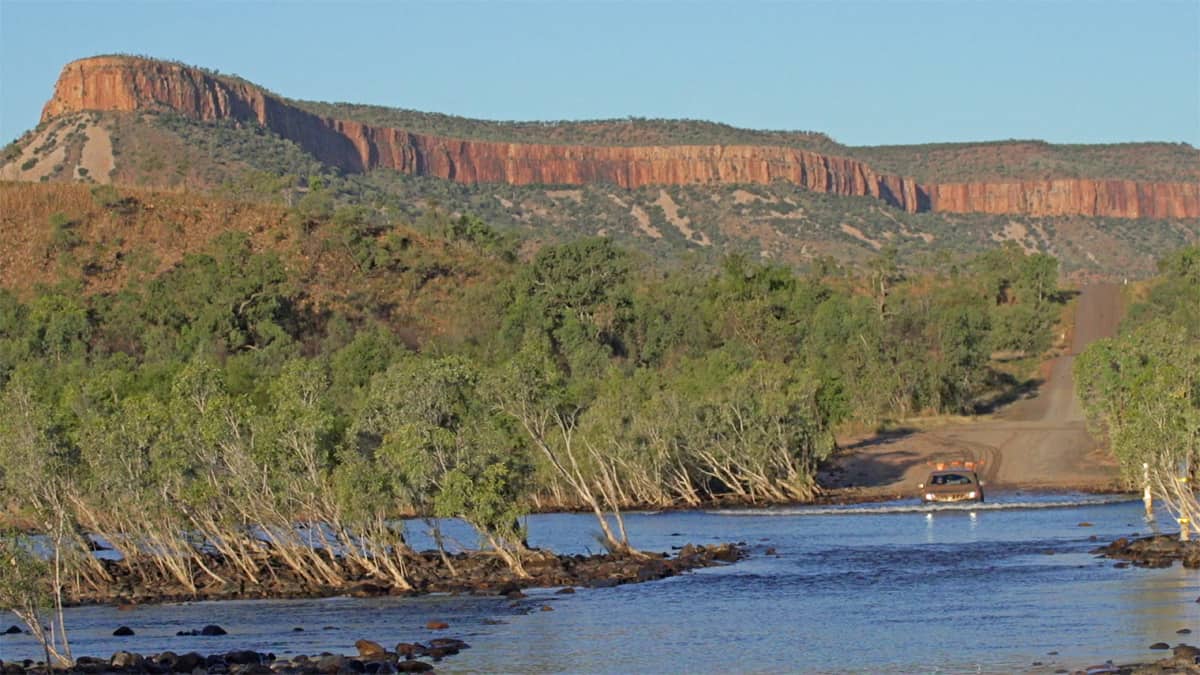 Last night we made it back to Perth – 7200km in 8-days. Yes it was a mission, yes we shot a lot of video and yes we learnt a lot about four-wheel driving.  So much so that it’s opened our eyes to a whole new realm of off-road adventure, and, highlighted just how capable the Triton is in the outback. In fact, it’s given rise to a new theme for this next film, as blow for blow, our dirt bikes and the 4WD were tested against each other in so many off-road situations. As the title of this blog states, ” Dirt bike vs 4WD ” our next film poses the question as to which of the two is the supreme outback vehicle?

Who knows, this could be the start of some new adventures for us here at Motology Films. 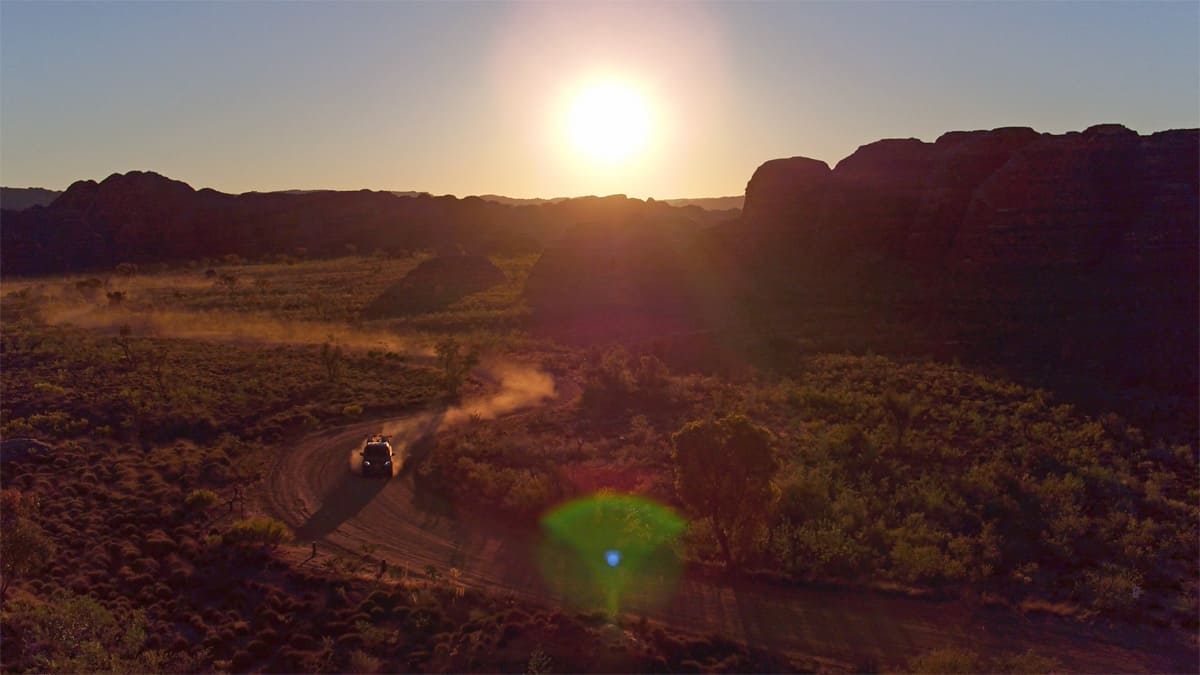 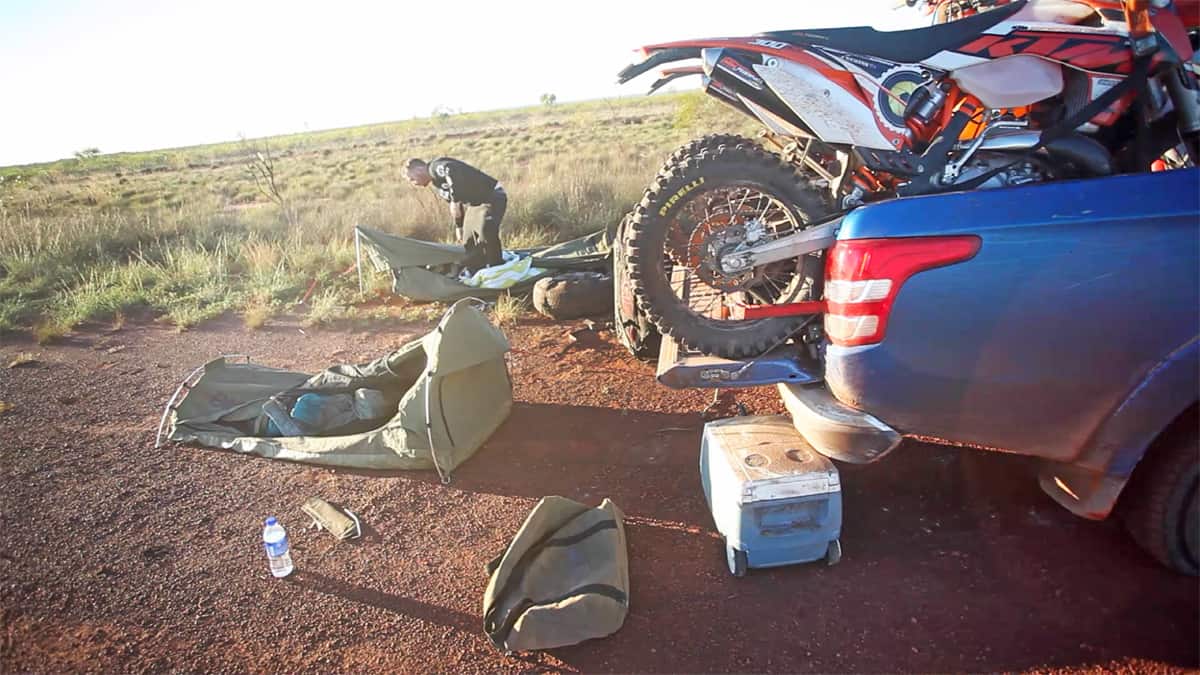 TC250 – Wide Open in the Dunes
Scroll to top